Rome is not a hugely pubby town. There are pubs, mostly of the type that serve both types of beer – Moretti and Peroni, but hidden away in quiet corners there are also a few that are real oases for the discerning beer drinker.

And so it was that on my first night in Rome, I followed my nose down the Via di Torre Argentina, the Via Arenula, and zigzagging a bit to cross the Tiber at the Ponte Sisto. Over the river and you’re into the cobbled mediaeval streets of the Trastavere, a bit of a nightlife centre. On reaching the Via Benedetta I spotted my target. It looks like nothing from outside, a door through a scruffy, graffitti-laden wall. 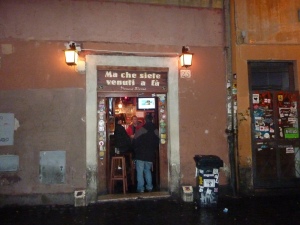 The sign over the door reads ‘Ma Che Siete Venuti a Fa’, a curious phrase that defies sensible translation. The words literally mean ‘but that makes you come to’, which doesn’t make a lot of sense. I’ve seen it translated into ‘What the hell are you doing here?’ but that can’t be right. I am informed by one of my contacts (thank you) that the phrase is a chant used by supporters of Lazio. The pub’s other name is the Football Pub, so this makes some sort of sense. Beneath the main sign is another, which I fully understand – ‘Domus Birrae’, house of beer.

What was it about this little, two-roomed pub three-quarters of a mile away from my apartment that drew me, tired and weary as I was, through the dark, rainy streets of an unfamiliar city? Well, it’s probably the best pub in Rome. The bar room opens directly onto the street, so much so that bar stools spill out onto the road. The whole interior is wood-panelled, and the walls are covered with the sort of eclectic ephemera that line the walls of pubs all over the world. There’s a football shirt signed by the team members of Sheffield United, and four football scarves, a number of framed awards and a large beer menu.

The bar area has seating for maybe a dozen people, and through a door opposite the main entrance is another room with seating for perhaps a dozen more. On a busy night, this place can be very cheek-by-jowl. 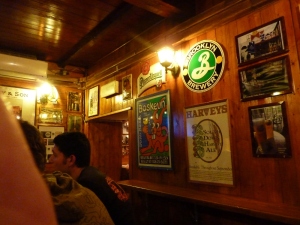 On the bar are thirteen uniform beer pumps dispensing artisanal beer from all over Europe. You can only drink beer here, there are no other options. I stood at the bar and surveyed the pumps. I didn’t know any of the beers. Excellent! The pub has two storage rooms, one at 12°C and the other at 6°C, so you can be sure of getting your beer at the right temperature.

The barman walked over to me and addressed me in English (how did he know?). ‘Hello, how are you?’ he asked. I replied that I was well, and had travelled a very long way to sample his beer. His face broke into a broad grin and he offered his hand ‘Hi,’ he said, ‘I’m Fabio.’

It’s quite something to see the barstaff here pour beer. You are warned that it may take several minutes to get your beer. They are careful not to overfill the glass with foam, and have special little scrapers to scrape foam from the top of the glass. Beer is served in two sizes, 200ml and 400ml. The 400ml glass they call a pint, though a pint is actually 568ml, so beware. 400ml generally costs 5 or 6 euros, so it’s not cheap. 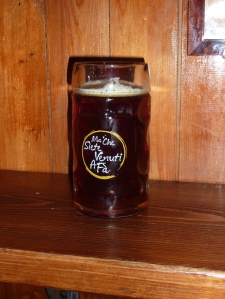 My first beer was an Italian Black IPA, Toccalmatto B Space Invader at 6.3%. There’s a very strong hop smell. The taste is massive hops with underlying black treacle and some smoke. There is also bitter espresso coffee. This is a massive mouthful and a great start to my Roman beer drinking experience.

Along with the B Space Invader, I ordered a Rurale Seta, a 5.0% Italian wheat beer. There’s a slightly unpleasant urinal-type smell to this one. Not too terrible, and the taste is better. The start has frankfurters, the middle citrus and a growing spiciness towards the end. It’s complex and warming, and well worth getting over the initial smell.

Next I had a beer which was brewed as a collaborative effort of the Toccalmatto and Extraomnes breweries. Called Tainted Love, it’s a 4.7% dark saison. Really dark, it’s quite black. The taste is also very dark. This is a really unusual beer. There are definitely malt and hops, but there is also a certain sourness that somehow contrives to be almost sweet. There is also smoke in the smell, but not so much in the taste. A fascinating beer.

I visited Ma Che Siete Venuti a Fa three times during my eight days in Rome. Other beers drunk there were:

Brewfist Fear, a 5.2% milk stout, also from Italy. I found it to be smooth and sweet. Very drinkable and remarkably light tasting for a 5.2% beer. There actually is a milky flavour to it, which I presume comes from lactose.

Another Italian, Elav Belfast Blues, a 4.1% bitter. It’s dark orange in colour and is nice and smooth with an upfront orangey flavour. Bitter, but not too much so. Back home this would make a nice session ale.

Gaenstaller Affumicator, a 9.0% rauchbier from Germany. OK, this was pretty horrible. Smoked beers are all right if there’s something else besides smoke. In this beer, there’s darkness, bitterness (lots of it) and smoke (bucketsful of it). Too smoky, didn’t like it.

Reinart Grand Cru, a Belgian Tripel weighing in at 8.0%. Dark brown in colour, this was one of those beers that I had to wait for. It was extremely foamy. It is sweet, fruity and rich with thick spirituous overtones. It is very smooth and pleasant, and the presence of bittering hops is evident.

Back to Italian beers, Birrificio Tipopils is a 5.2% Pils. Typically yellow, it has a bright, clean, hoppy taste. There is a slight hint of soap. Very good and very refreshing. It was served quite cold, evidently from the 6°C room. 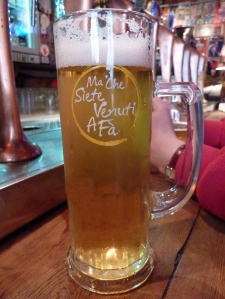 Despite its small size, this is a very comfortable place to be. The staff and the customers are friendly and forgiving of poor Italian. Lady A and I were the only non-Italians in the place, but we felt right at home. It’s no wonder this little gem of a pub has won so many awards. If I had awards to give, I’d give one to them!

Words and images are my copyright, please respect that. All you have to do is ask. Thank you.

2 responses to “The Best Little Pub in Rome, Probably”